Tramways are usually associated with large towns, built up areas, big buildings and much traffic. Can you imagine a tram line through a fantastic rural landscape? An example of such a tram line is Kirnitzschtalbahn in Eastern Germany. That Kirnitzschtalbahn has survived till today is probably due to the fact that it was situated in former East Germany. East Germany had another economic structure than countries in Western Europe, and a tram line was more needed, and so it was allowed to remain.

The gate to the valley of Kirnitzsch is the small tourist town Bad Schandau on the river Elbe. From the town of Dresden you will reach Bad Schandau by local train (S-Bahn), but as the town itself lies on the opposite bank from the station, you have to cross the river by a ferry. Before 1963 you could reach the terminus of Kirnitzschtalbahn after a short walk. In two steps the line was shortened, and in 1969 the new terminus was established in the town park.  The position of a tram line was not too safe even in socialist German Democratic Republic. The reason for withdrawing the Kirnitzschtal from a central position in the town was that the street was needed for the motor traffic. Several times during the last century there were strong voices which wanted to replace the trams by buses. For shorter periods the tram line was closed to all traffic but it was finally decided that the the trams should remain, and necessary renewals of the track and the overhead wires were introduced. The Kirnitzschtalbahn is an essential factor for tourism in this special landscape called Saxonian Switzerland. 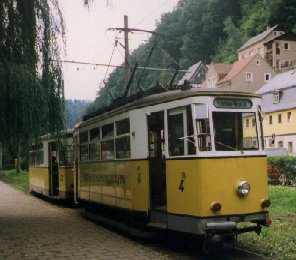 At the terminus Stadtpark. Motor no. 4 was transferred from Lockwitztalbahn in 1977.

A tram is leaving Bad Schandau 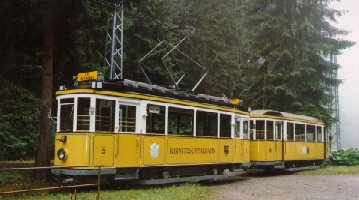 Motor and trailer originally delivered to Kirnitzschtalbahn in 1928.

When I visited Kirnitzschtalbahn in 1992 I heard from a tram driver/conductor that the tram line would be extended through Bad Schandau to its original terminus. In 1992 disused tram tracks remained in the town. In 2001 when I again visited the tram line, no such extension had taken place. The tracks in the streets of Bad Schandau had been removed. A ribbon of black asphalt in the nostalgic cobble stoned streets showed where once the trams of the Kirnitzschtalbahn transported its passengers through the town.

At the terminus Town park (Stadtpark) an interesting plaque of iron has been put up, saying that at this site was the edge of the largest extension of the Scandinavian ice shelf. This fact explains the special landscape you find in this area. The melting water from the ice cap has effectively eroded this sand stone area. Deep valleys have been excavated in marked contrast to the rocks which have remained. The landscape is called Saxonian Switzerland. The metre gauge tram line follows the valley Kirnitzschtal, surrounded by steep rocks, which make the ride on this tram line particularly impressive. The tram line, which is single track throughout, runs along the right  hand side (from Bad Schandau) of the road through the Kirnitzschtal. The road is set with cobble stones and gives the right nostalgic look. Between the rails of the tram line the cobble stones have been replaced by plates of concrete. 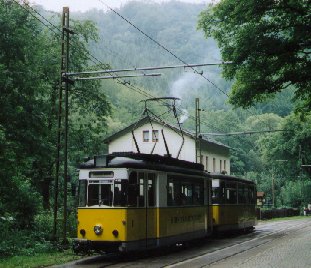 On the single track a tram heading for Lichtenhainer Wasserfall is waiting for the tram towards Bad Schandau. 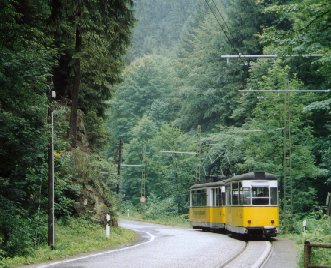 The tram track lies at the edge of the road in this fantastic landscape. 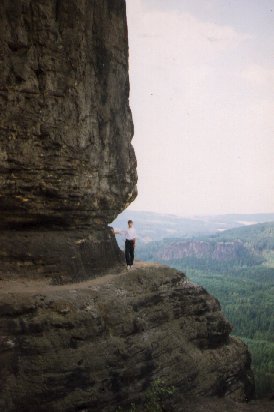 From the Kirnitzschtalbahn you have access to the Schrammstein area in the Saxonian Switzerland.

On its way up through the valley the tram passes the depot on the roof of which solar cells have been installed. This device delivers as much as one third of the current needed to operate the tram line. The various stops along the line are starting points for hiking tours into the Schrammstein area with its incredible rock formations. After 8 km the upper terminus is reached – Lichtenhainer Wasserfall. At this point there is a restaurant which has got tables in the open air on the other side of the tram track. In 1992 I observed a waiter carrying a tray full of drinks and food and was on his way to the guests on the other side of the track. A tram was approaching; and the driver slowed down and let the waiter pass. I found that such a nice gesture, and that is characteristic of the Kirnitzschtalbahn which leaves you with so many favourable impressions.