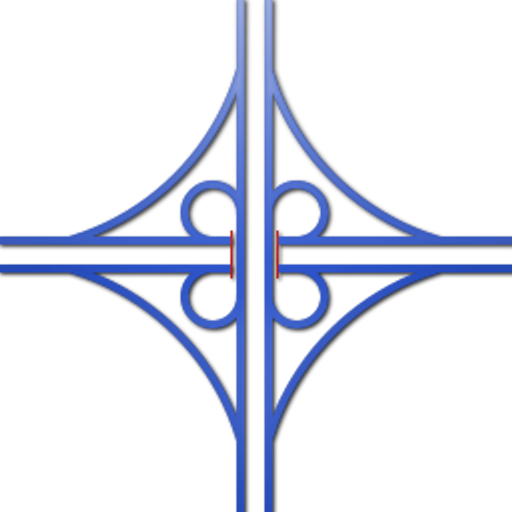 I must admit that I do not know all railroad lines in the world, but I consider it highly unlikely that anywhere two railroad lines are connected by a cloverleaf. They do exist in games that need not be realistic in every aspect, but this page is not focussed on games or model railroads, so we will ignore this from now on. You might ask the railroad companies why, but at least it is highly plausible. First of all most connections between railroad lines happen in stations. This makes sense for allowing for passengers to change trains and for rearranging freight trains. But there are cases where two rail lines intersect without a major station. Examples that come to my mind are the lines from Darmstadt via Weinheim to Schwetzingen and the line from Mannheim to Heidelberg in Germany that intersect near Mannheim Friedrichsfeld. Or near Zürich were the lines from Wallisellen to Dübendorf and from Stettbach to Dietlikon intersect. The two main lines intersect using a bridge and then some of the connections are made possible using parially level crossings and partially bridges.

The first question is if bridges instead of level crossings are as important for rail as they are for roads. Because the signalling system provides exclusive use of a track to one train, even highspeed tracks may have grade crossings, as long as the switches are built in a way to allow high speed. This does not even slow down the high speed trains during normal operation. The highspeed train gets the track and all other trains have to wait. Schedules are usually made in a way that minimizes such waiting times, so they usually only occur to greater extent if some train is delayed. But if you look how railroad infrastructure has been built it will be obvious that bridges between different tracks are quite common, at least in busy sections of the network. Other than for road transport this is less an issue of speed and security and more an issue of capacity. The bridges allow for more simultaneous train moves and there are less situation in which one train blocks many tracks at the same time mostly near a station. This has been known in the 19th century and a typical construction for a station connecting two rail lines included a bridge for crossing over between the two lines coming from one end. Assuming lines coming from north, east, south and west and a station that is oriented from north west to south east, the lines from the north and the west enter on one side and those from the south and the east from the other side. With this bridge between the lines coming from north and from east the typical setup of trains going from north to south and from east to west allows all four directions to pass simultaneously if the lines are double track.

Typically level crossings are only avoided for combinations that are used frequently. Blocking some tracks by rare operations which might even happen during night times is not a priority.

But returning to the cloverleafs: They are not really grade separated and they would use tremendous amounts of space because of the minimal curve radius of railroad tracks.

Here is such a cloverleaf which has in a way level crossings („weaving“) in the red areas: 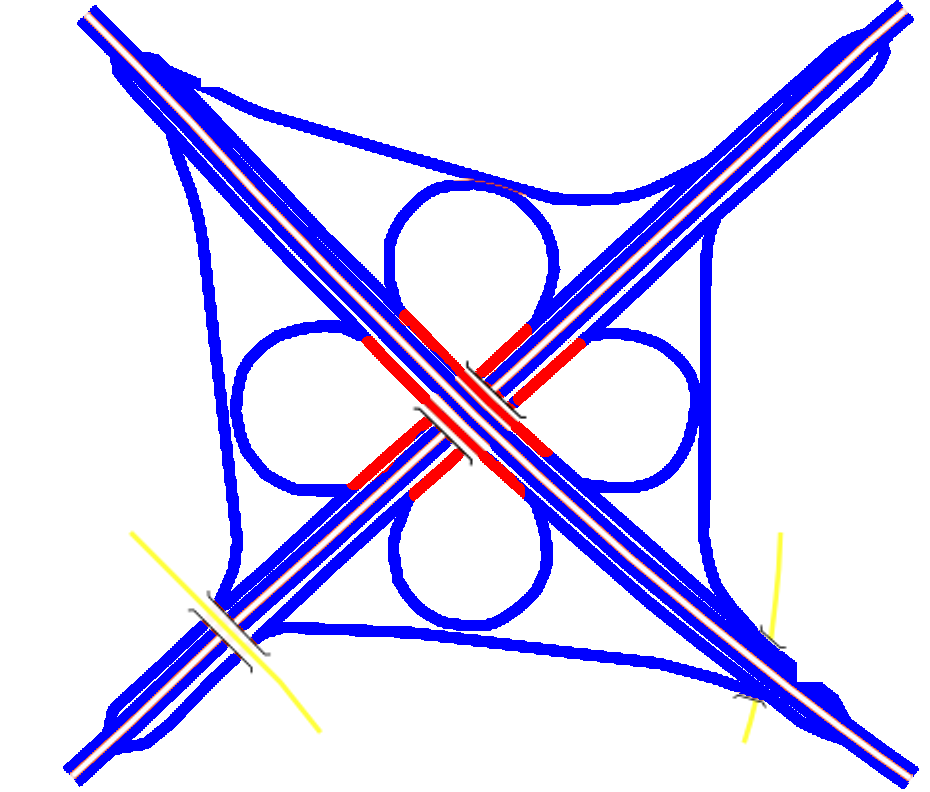 With low traffic densities and traffic consisting of small individual vehicles like bicycles, cars or trucks this works just fine. And a highway that seems to be filled with cars does not really have a very high traffic density because cars are so wasteful with space. As long as the traffic of two neighboring leaves combined is less than the capacity of one lane this can work. Otherwise even for highways other constructions that are really grade free and less space consuming, but more expensive to build seem to be more adequate. Some of them could actually work for railroads as well, because they widely avoid unnecessary curves. 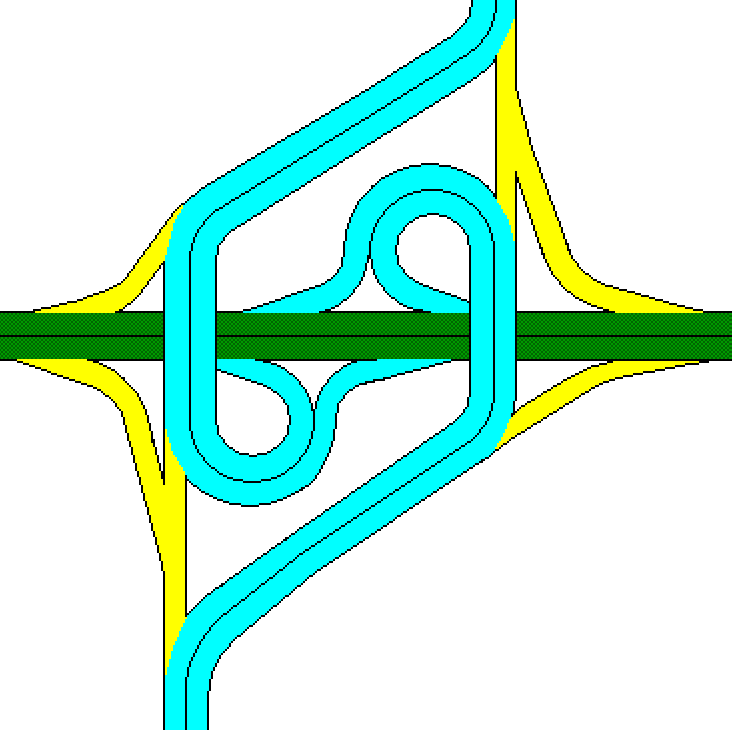 Very elegant because it can be built with two levels and is anyway fully grade free. But not good for railroad tracks because of the 270°-bows. This does not work very well either for more than one roadway per direction. 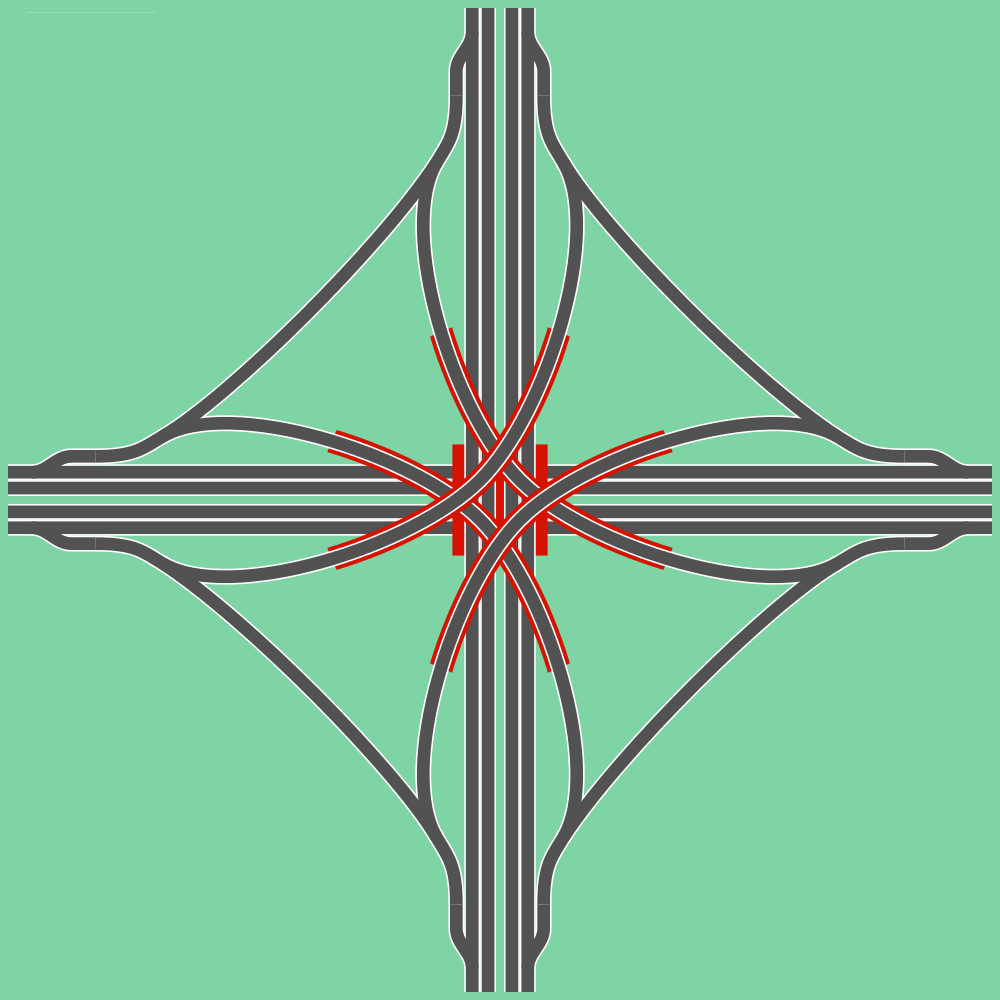 This works for any number of tracks, road ways, bicycle ways, tram tracks, bus lanes and whatever combined by just adding more curves. But it needs four levels instead of two. The same principle works for combining

throroughfares meeting in one point using

At some point these interchanges grow so high and the ramps for the height differences so long that it would no longer be possible to build this, even with a lot of money. It is very unusual to see such constructions for

Here are some more setups: 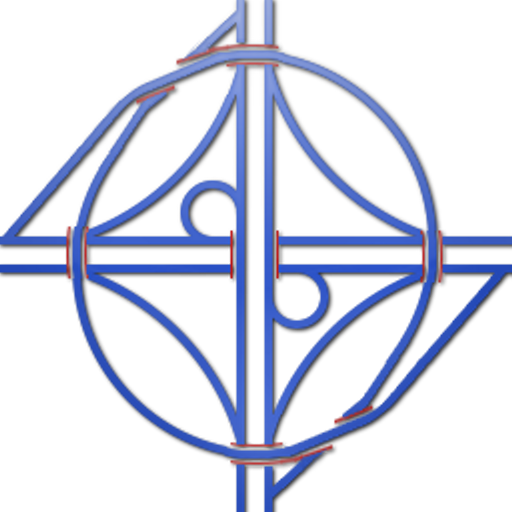 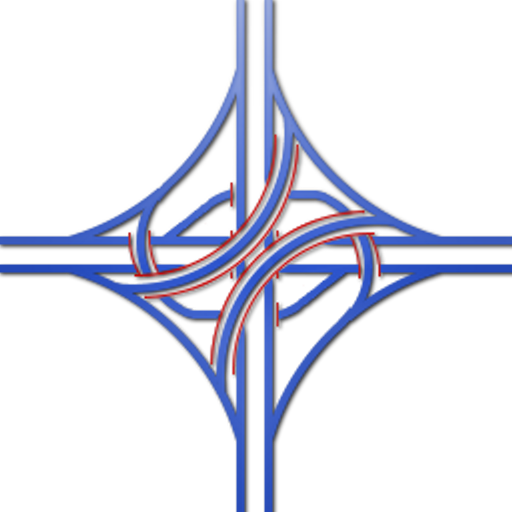 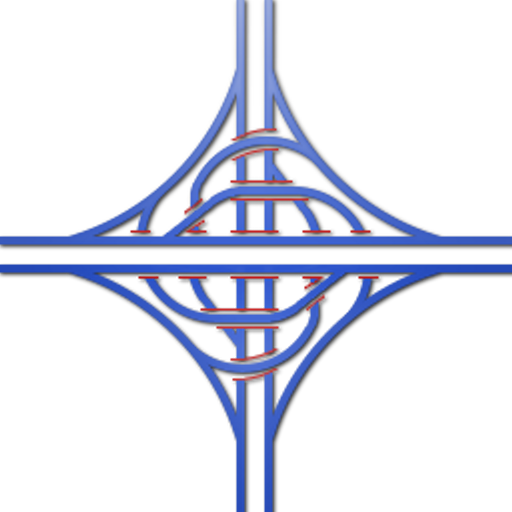 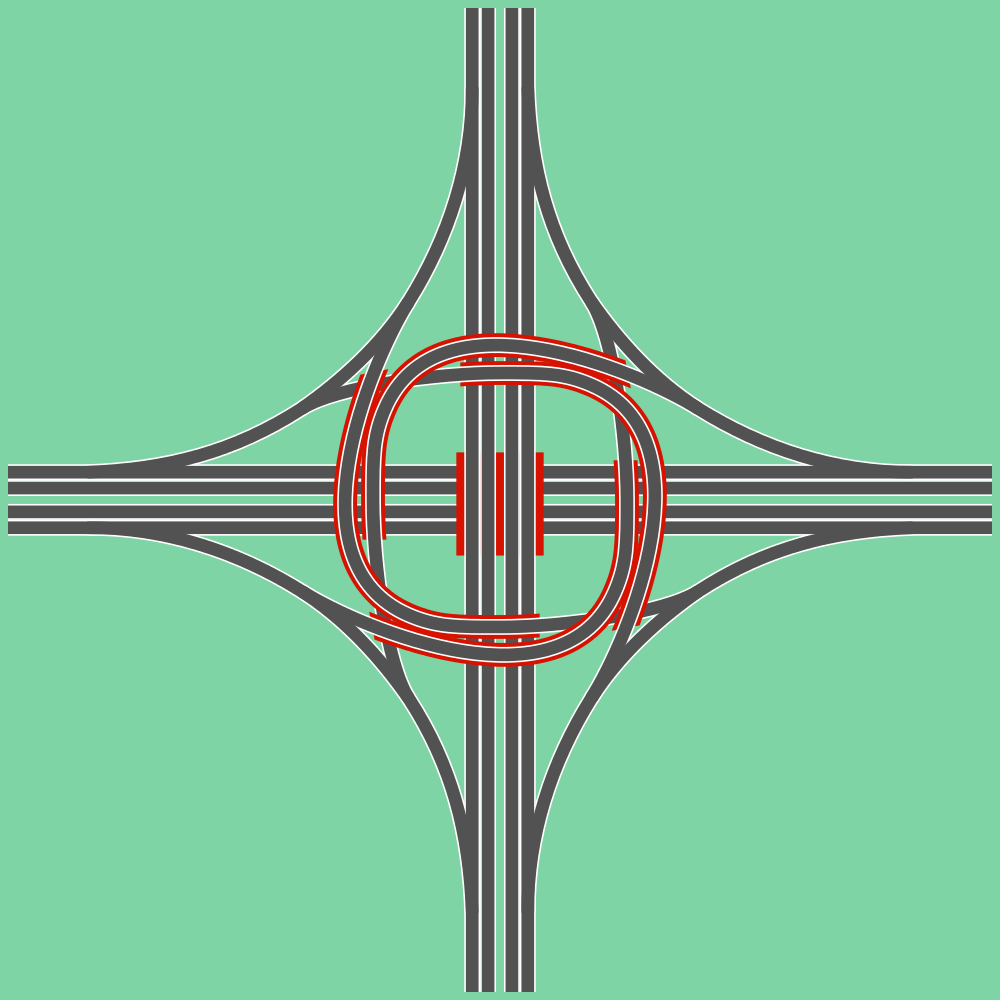 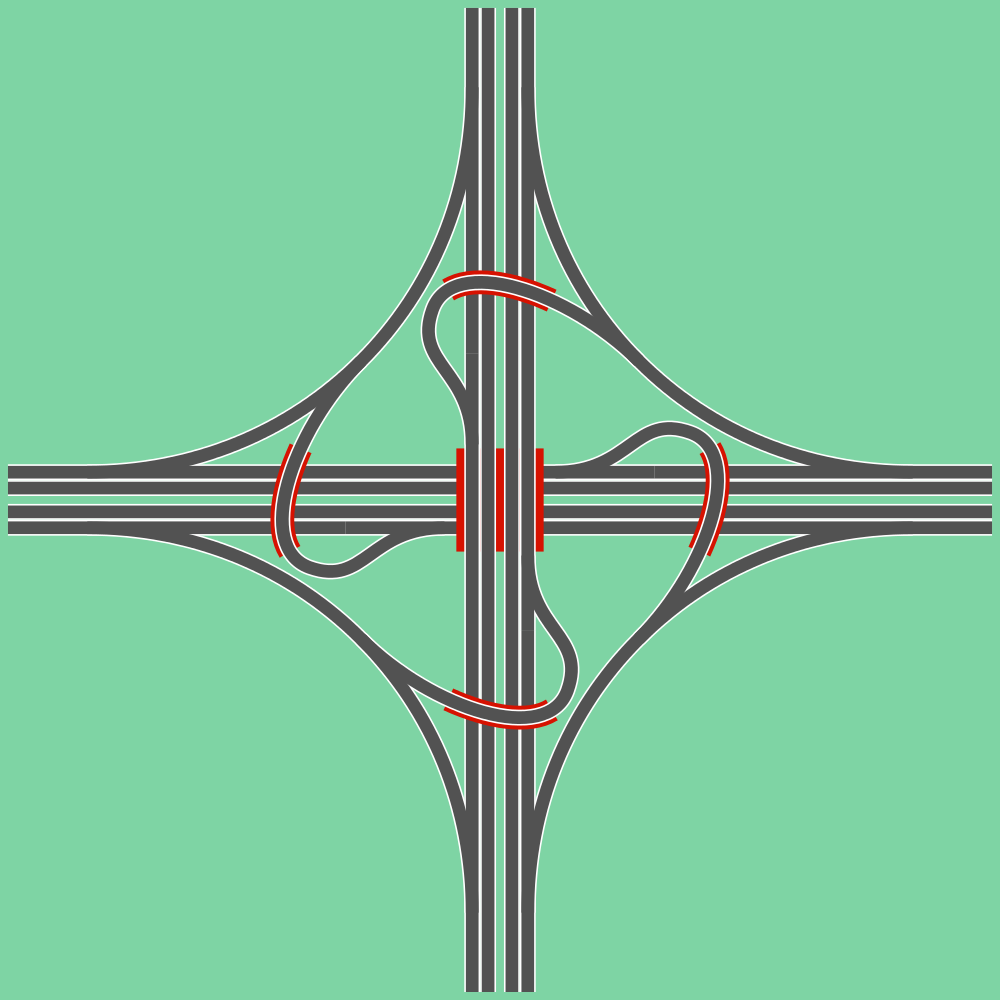 There are much more possibilities. Hopefully we won’t end up with something like this: 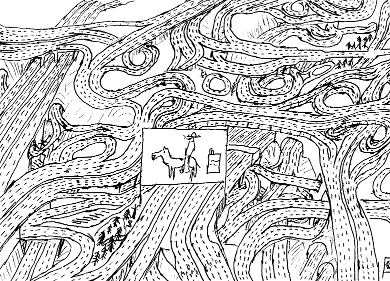 It is absolutely possible to connect any number of throughfares with any number of tracks, roadways bicycle lanes, bus lanes etc. avoiding 270°-bows and using just two levels in a fully grade free way. The idea is very simple and I just describe it for tracks for the sake of simplicity: All tracks have only one direction. The lower level carries tracks running from north to south and vice versa in the vicinity of the interchange, possibly turning wherever they really go. The upper level has tracks running from east to west and vice versa. Each incoming track splits into two tracks. On of them continues to the other side and only takes incoming connections. This is a collector. The other one only branches into curves connecting to the other tracks, called distributor. All tracks cross the field, using some space between different tracks. Whenever a collector and a distributor cross, the appropriate connection is present. After having crossed the whole field, for example from south to north, a distributor splits into two distributors going east and west until the last collector has been met. This allows for all possible connections in a fully grade free way and with no capacity constraints other than those imposed by the tracks leading and from the interchange. It needs very much space. And it is a theoretical construction, because in practice it seems to be sufficient to offer the most important connection in a grade free way. Real railroad interchanges are relatively compact, but the station or the yard that happens to be located at the interchange can be huge.